Here are just a few snapshots of what God is doing through White Horse Media. Last weekend (Jan. 19,20), we were in Toronto, Canada, and held a seminar entitled, “Living in the Last Days,” at the Bronte SDA Church. The church was packed. An overflow room with a screen was set up, and extra chairs were placed in the lobby. Jesus was lifted up, and the Holy Spirit came down. What a blessing! Many responded to an altar call and came forward for Christ. 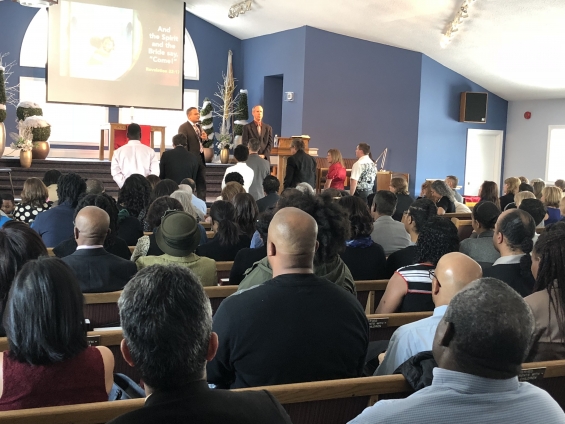 White Horse Media is also coordinating outreaching teams and missionary activities in Indonesia, India, and the Philippines. Below is a picture of Tim Saxton and Steave Mandang, a young businessman in Indonesia who came to Jesus through listening to White Horse Media programs. He now directs a supportive web ministry and translates our material into his native language to share them online. 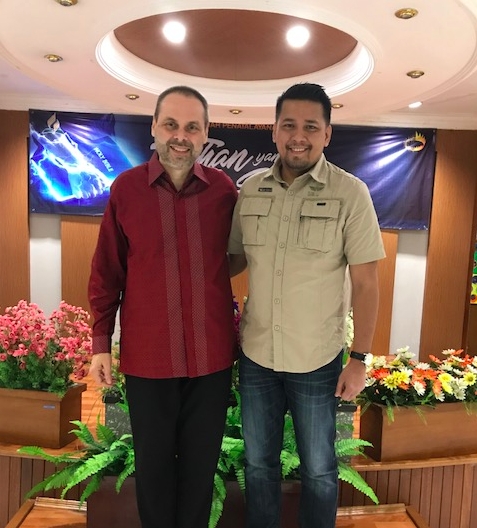 In August of 2017, our White Horse Media Bible Instructor, Junie Lawson, traveled to India for the first time as part of a White Horse Media team. During that trip, she witnessed the powerful impact God’s Word had on the people, and had an opportunity to speak herself to various women’s groups. “I feel like I left part of my heart in India,” Junie reflected when she returned home.

A couple months later this word came: “There are 400 women in India who want to learn to be Bible workers.” As a Bible instructor for 29 years, Junie couldn’t resist this plea. If God can use me to ‘pass the torch’ to these women, Junie thought, many souls might be won for His kingdom. After wrestling over going back, and praying, she felt impressed to accept the call. This time she asked a young friend from church, Kayla Munson, if she would join her. “Yes!” Kayla replied without hesitation.

After much prayer, planning and preparation, Junie and Kayla traveled to the State of Orissa in India for the training seminar. Kayla shared her testimony and love for God with the young ladies in attendance, while Junie shared a 12-part series. These Indian women were eager, attentive and desirous to learn all they could. Several came to Junie and Kayla between meetings, asking for prayer because of various illnesses and problems.

At the completion of the seminar, great appreciation was expressed by the pastor, who wrote of “the wonderful work” Junie and Kayla did. “I felt the presence of God during the meetings. The Lord has richly blessed your effort during the training of our women here,” said Pastor Udai Chandra.

“The trip to India was a great privilege and blessing, and I thank God for the opportunity to serve Him,” said Junie. Please join us in praying that God will continue to bless and use these faithful ladies in India as they put into practice what they learned to lead others to Jesus Christ and the end-time truths of His Word.

A Jewish Christian from Los Angeles, Pastor Steve Wohlberg is the Speaker/ Director of White Horse Media (Priest River, ID) and the host of His Voice Today radio and television broadcasts. A prolific writer and much in-demand speaker, he is the author of over 30 books and has conducted Bible prophecy seminars throughout North America and overseas. He has been featured on three History Channel documentaries (Nostradamus Effect: Secrets of the Seven Seals; Armageddon Battle Plan; Strange Rituals: Apocalypse) and has spoken by special invitation inside the Pentagon and U.S. Senate. He currently lives in Priest River, Idaho, with his wife Kristin and their two children, Seth Michael and Abigail Rose.
What Is REAL ID? Trump Administration Enforces New Identification Cards To Combat Terrorism After 13 Year Delay NEW WHM Sharing Pocketbook on DEADLY DISASTERS Now Available