The Global War on Cash 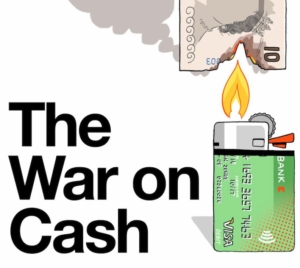 The Global War on Cash – “Governments and central banks have moved swiftly in dozens of countries to start eliminating cash. Some key examples of this are Australia, Singapore, Venezuela, the U.S., and the European Central Bank have all eliminated (or have proposed to eliminate) high denomination notes. Other countries like France, Sweden and Greece have targeted adding restrictions on the size of cash transactions, reducing the amount of ATMs in the countryside, or limiting the amount of cash that can be held outside of the banking system. Finally, some countries have taken things a full step further – South Korea aims to eliminate paper currency in its entirety by 2020.

“But right now, the “War on Cash” can’t be mentioned without invoking images of day-long lineups in India. In November 2016, Indian Prime Minister Narendra Modi demonetized 500 and 1000 rupee notes, eliminating 86% of the country’s notes overnight. While Indians could theoretically exchange 500 and 1,000 rupee notes for higher denominations, it was only up to a limit of 4,000 rupees per person. Sums above that had to be routed through a bank account in a country where only 50% of Indians have such access.

“The Hindu has reported that there have now been 112 reported deaths associated with the Indian demonetization. Some people have committed suicide, but most deaths come from elderly people waiting in bank queues for hours or days to exchange money.

“The shots fired by governments to fight [their] war on cash may have several unintended casualties:

1. Privacy
• Cashless transactions would always include some intermediary or third-party.
• Increased government access to personal transactions and records.
• Certain types of transactions (gambling, etc.) could be barred or frozen by governments.
• Decentralized cryptocurrency could be an alternative for such transactions

2. Savings
• Savers could no longer have the individual freedom to store wealth “outside” of the system.
• Eliminating cash makes negative interest rates (NIRP) a feasible option for policymakers.
• A cashless society also means all savers would be “on the hook” for bank bail-in scenarios.
• Savers would have limited abilities to react to extreme monetary events like deflation or inflation.

3. Human Rights
• Rapid demonetization has violated people’s rights to life and food.
• In India, removing the 500 and 1,000 rupee notes has caused multiple human tragedies, including patients being denied treatment and people not being able to afford food.
• Demonetization also hurts people and small businesses that make their livelihoods in the informal sectors of the economy.

4. Cybersecurity
• With all wealth stored digitally, the potential risk and impact of cybercrime increases.
• Hacking or identity theft could destroy people’s entire life savings.
• The cost of online data breaches is already expected to reach $2.1 trillion by 2019, according to Juniper Research.

“As the War on Cash accelerates, many shots will be fired. The question is: who will take the majority of the damage?

There is one further casualty, freedom of religion. The Bible says that those who do not comply with the coming global worship laws will have their assets restricted or even “frozen.” They will be forbidden to buy or sell unless they comply with government sanctioned worship laws. This form of coercion is predicted to come as a penalty for non-compliance.

Ads for Franklin Graham Festival Banned Due to His Views on Homosexuality ‘Biblical Disaster’: 70-Plus Dead In Greece Wildfires