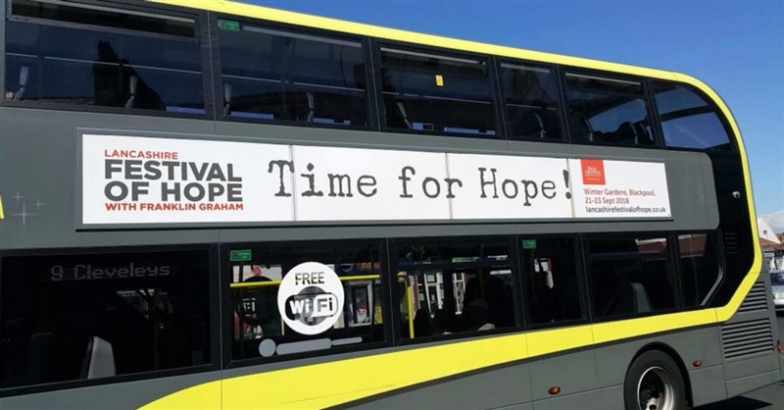 Evangelist Franklin Graham says his Festival of Hope will go on in the United Kingdom despite backlash and a local bus company banning ads for the event.

The Festival of Hope is scheduled to take place Sept. 21-23 in Lancashire and feature a Gospel message from Graham along with music from The Afters, Rend Collective and Michael W. Smith.

Earlier this month, Blackpool Transport – which runs buses in the area – announced it was removing ads for the festival following a social media protest that highlighted some of Graham’s pasts statements about homosexuality and other issues.

Jane Cole of Blackpool Transport told local media that the removal was the “result of us listening and acting on customer and public feedback.”

“Blackpool Transport is a proud ongoing supporter of the Pride and LGBT+ communities and in no way did we intend to cause any distress or upset,” she said. “All buses carrying the advert will remain off the road until they have been removed.”

Graham, on his Facebook page, said the festival is directed at people who are looking for hope.

“Sex, drugs, money, even religion — none of these are the answer,” he wrote. “I’m coming to share with everyone in Blackpool, Lancashire, and across North West England that there is One who can give you hope. Hope for today, hope for tomorrow, and hope for eternity. His name is Jesus Christ!”

The Festival of Hope website noted that nearly 200 Lancashire churches are involved in the festival and more than 1,300 church members participated in the Christian Life & Witness training course in preparation for the festival.

“The Festival will be a positive event, and the largest ecumenical Christian event in Lancashire for a generation,” the website said. “There is a great deal of excitement amongst large parts of Lancashire’s Christian community as we prepare to share the hope of Jesus Christ.”

Michael Foust is a freelance writer. Visit his blog, MichaelFoust.com