Steve Wohlberg Goes Public About His Worst Crisis Ever – Today is November 15, and I feel great. But I’m being honest when I tell you that the summer of 2017 was absolutely horrible for me. Beyond words. A nightmare. I didn’t think I would survive. The devil whispered that I was lost, abandoned by God, and hopeless. I’m not kidding. I thought my entire life was over. Like David wrote in the Psalms, I “drew near to the gates of death” (Psalm 107:18). But thank God, the crisis is past. I am sooooo grateful. About a month ago God opened the door for me to share my story in my home church in Newport, Washington. “Ok Lord, here goes …” That talk was called, “I Can’t Sleep! My Crisis. God’s Victory.” It’s now posted on Audio Verse, and is being downloaded almost 500 times a day. This is amazing to me. From the responses we are getting, God is using my struggle to encourage many of His people. None are hopeless. None are abandoned. Satan is a liar. Jesus loves us all. To hear that talk, click the picture below. I hope it is a BIG blessing to you!

“He restores my soul” (Psalm 23:3), wrote David. I can say the same thing. My Lord Jesus Christ has restored my soul, my heart, my mind, my sanity, my faith, my strength, my health, and my relationship with my dear family. Praise His holy name! Now that Jesus has rescued me from my darkest pit, I’m holding seminars as usual, trusting God as usual. I’m also going to write a small pocketbook about my battle soon, which hopefully will encourage many hearts to keep trusting Jesus no matter what. He is always faithful. The CD of “I Can’t Sleep!” is now available from White Horse Media. Our next LIVE “Startling Prophecies for America” seminar will be held this weekend in Whitmore, California. Details are below: 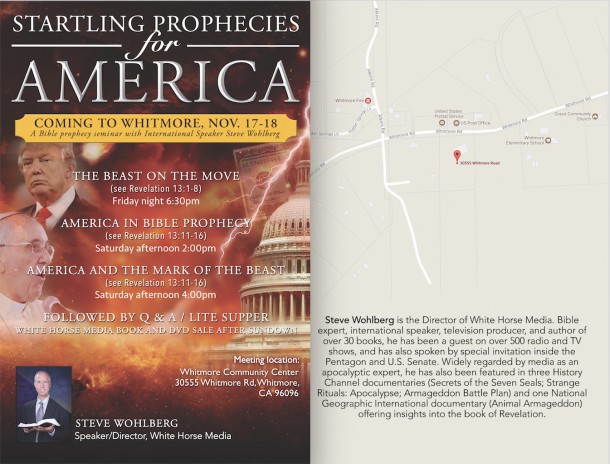 If you live near Whitmore, we hope you will join us. If you come and want a hug from me, just ask. I’ll be glad to give you one. IT IS SO GOOD TO BE ALIVE, FOLLOWING JESUS! After hearing, “I Can’t Sleep!”, here are just a few of the many responses we have received:

Pastor Steve, I listened to your testimony about your summer early this morning. My heart just broke for you and your family. Thank you for being willing to share your story and make yourself that vulnerable. We need transparency today. The enemy wanted to take you down, I have no doubt. David and I will take our prayers for you and your family even more seriously now. God bless you and thank you for your faithfulness … Give your family my love and best regards. Dianne

As I listened, the tears rolled, I whispered, “Yes, I’m familiar” … I praise Him for working in our lives to prepare us and also for His encouraging and strengthening heavenly agencies of love … Amanda

Reminds me of Mike Adkins song, “No Matter What You Are Going Through, You ARE Going Through.” Praise God. Your testimony will help many. Lydia

As always, thank you so much for your prayers.

A Jewish Christian from Los Angeles, Pastor Steve Wohlberg is the Speaker/ Director of White Horse Media (Priest River, ID) and the host of His Voice Today radio and television broadcasts. A prolific writer and much in-demand speaker, he is the author of over 30 books and has conducted Bible prophecy seminars throughout North America and overseas. He has been featured on three History Channel documentaries (Nostradamus Effect: Secrets of the Seven Seals; Armageddon Battle Plan; Strange Rituals: Apocalypse) and has spoken by special invitation inside the Pentagon and U.S. Senate. He currently lives in Priest River, Idaho, with his wife Kristin and their two children, Seth Michael and Abigail Rose.
Blasting aerosol into the sky to cool the planet might lead to drought and hurricanes Scientists Implant Human Brain Cells in Mice