In the music world, Kanye West’s popularity is off-the-charts. If you’ve never heard of him, Wikipedia has this to say:

Born in Atlanta and raised in Chicago, West is among the most critically acclaimed musicians of the 21st century and one of the best-selling music artists of all time with over 140 million records sold worldwide. He has won a total of 21 Grammy Awards, making him one of the most awarded artists of all time and the most Grammy-awarded artist of his generation. Three of his albums have been included and ranked on Rolling Stone’s 2012 update of the “500 Greatest Albums of All Time” list and he ties with Bob Dylan for having topped the annual Pazz & Jop critic poll the most times ever, with four number-one albums each. Time magazine named him one of the 100 most influential people in the world in 2005 and 2015.

The reason I’m posting this is because Kanye West has recently debuted his newest album, Jesus is King, which has surged to the top of Christian charts worldwide. 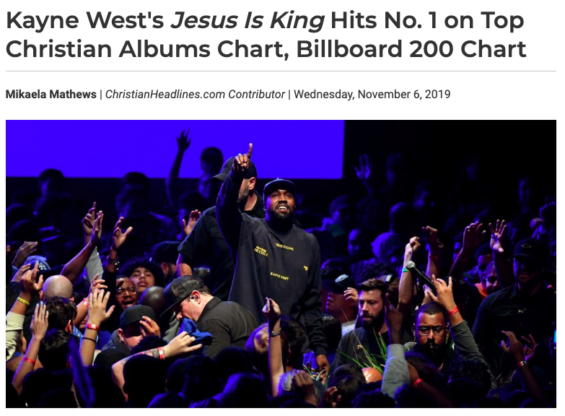 To be more specific, Song 4 of West’s new Jesus is King album is entitled, “Closed on Sunday,” and is based on the example of the fast food chain, Chic-fil-A, which, seeking to honor God’s supposed will for humanity to keep Sunday as a day of rest, now conducts business only Monday-Saturday. The lyrics of West’s song highlight the importance of family, standing up for God, denying modern Jezebels, and going to church—on Sunday.

I’m not writing this E-news to bash Mr. West. Only God knows his heart, and I surely hope the musician keeps growing in his relationship with Jesus. My point is this: Mr. West’s new song about stores being “Closed on Sunday” is planting “Closed on Sunday” seeds in the minds of millions. According to the book of Revelation (see Revelation 14:7,9-12), this very “Should Stores Be Closed on Sunday?” controversy is also destined to soar off-the-charts.

On this point, Kanye West’s new song points in the wrong direction.

To learn more about this raging issue and the future, see White Horse Media’s Discovering the Lost Sabbath Truth (pocketbook), Startling Prophecies for America (DVD series), The Sunday Law Crisis (DVD), and our newest, “Climate Change and the Mark of the Beast” (DVD).

I encourage prayers for Kanye West.

From what I’ve read about him recently, I think he would agree he needs them.

A Jewish Christian from Los Angeles, Pastor Steve Wohlberg is the Speaker/ Director of White Horse Media (Priest River, ID) and the host of His Voice Today radio and television broadcasts. A prolific writer and much in-demand speaker, he is the author of over 30 books and has conducted Bible prophecy seminars throughout North America and overseas. He has been featured on three History Channel documentaries (Nostradamus Effect: Secrets of the Seven Seals; Armageddon Battle Plan; Strange Rituals: Apocalypse) and has spoken by special invitation inside the Pentagon and U.S. Senate. He currently lives in Priest River, Idaho, with his wife Kristin and their two children, Seth Michael and Abigail Rose.
California Fires. Judgments from God? Are We Ready for the Future? Steve Wohlberg appeals to Kanye West. Please Pray.