Amidst massive media coverage, President Trump met Pope Francis this morning for the first time inside the Vatican. Significantly, a Fox News report referred to this meeting as occurring between “the two possibly most powerful men in the world.” Bingo. This echoes the language of biblical prophecy, Revelation 13 describes two beasts as the major players in end-time events: The sea beast (Revelation 13:1), representing the worldwide Roman Catholic Church, and the lamblike beast (Revelation 13:11), representing the United States of America. In spite of current differences between Trump and the Pope, Revelation 13:12-17 predicts that sometime soon—in response to a major crisis that can break at any moment—both beasts will finally cooperate in the enforcement of the “mark of the beast” during earth’s final crisis. 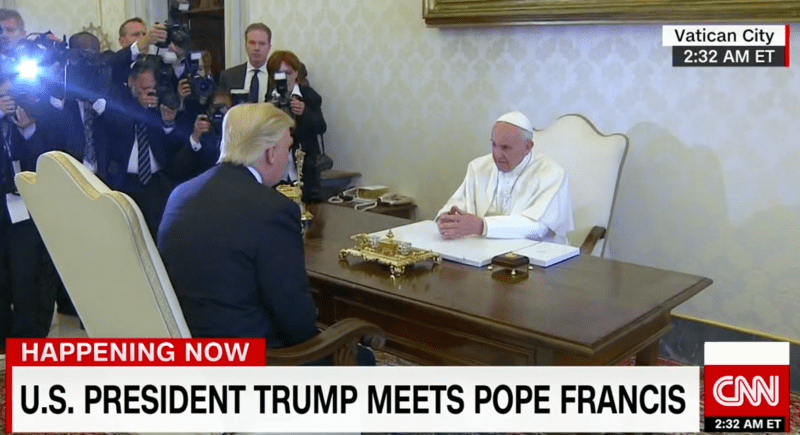 Think about this. Why would President Trump, representing the most powerful country on earth, during his first overseas trip to Saudi Arabia and Israel, stop in Rome to visit the Pope? Because the Pope has such powerful global influence. This is exactly what Revelation 13 predicts. Concerning the beast (the Roman Church), God’s Word says, “the dragon gave him his power, his throne, and great authority” (Revelation 13:2). The “dragon” represents both Satan (see Revelation 12:9) and the Roman empire (see Daniel 7:7,23), and the Roman Church is but the continuation of the Roman empire in a Christian form. “So they worshipped the dragon, who gave authority to the beast, and they worshipped the beast, saying, “Who is like the beast?'” (Revelation 13:4). Truly, what power is like the Roman Church? There is none. This is the reason why Trump stopped in Rome for his visit.

White Horse Media’s 4-part TV series, Startling Prophecies for America, explains in meticulous detail Revelation 13’s prophecy about both beasts, the mark of the beast, and final events. You can watch it free on our Youtube channel, or you can purchase our inexpensive DVD. Dear friend, shall we wait until the final crisis hits before we sound the warning? God forbid. The time to spread the three angel’s messages of Revelation 14:6-12 is now.

We appreciate so much your prayers and support as White Horse Media presses forward to do God’s will, to preach His three angels’ messages from the Bible without compromise, and to lift up our Lord and Savior Jesus Christ as the Savior of the world. By God’s grace, let’s not be diverted from our mission by Satan-inspired controversies that zap our strength.

A Jewish Christian from Los Angeles, Pastor Steve Wohlberg is the Speaker/ Director of White Horse Media (Priest River, ID) and the host of His Voice Today radio and television broadcasts. A prolific writer and much in-demand speaker, he is the author of over 30 books and has conducted Bible prophecy seminars throughout North America and overseas. He has been featured on three History Channel documentaries (Nostradamus Effect: Secrets of the Seven Seals; Armageddon Battle Plan; Strange Rituals: Apocalypse) and has spoken by special invitation inside the Pentagon and U.S. Senate. He currently lives in Priest River, Idaho, with his wife Kristin and their two children, Seth Michael and Abigail Rose.
New: E-News Comments Coming Soon White Horse Media in India, Netherlands, London