The free “Ten Commandments/Gospel/Prophecy 5×8 Handouts (English and Spanish)” now also ship for FREE! (in the U.S. ONLY)
The White Horse Media Online Bible School is now live. Enroll now!
Free shipping on orders over $25 in the United States. Exclusions apply.
Previous
Next 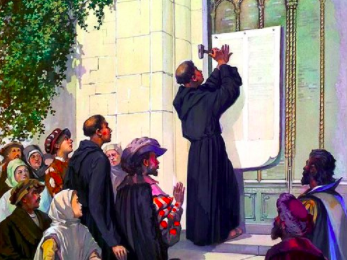 October 31, 2016 just passed, which means we have officially entered the 500th year since the Protestant Reformation began. 499 years ago, on October 31, 1517 to be exact, Augustinian monk Martin Luther hammered his famous “95 Theses on the Power of Indulgences” onto the door of the Castle church in Wittenberg, Germany. At that time, when Luther’s hammer hit the nail, he was still a loyal member of the Roman Catholic Church; but his confidence in Romanism had been shaken, especially since Rome was peddling phony certificates called “indulgences” that supposedly granted payees pardon for all their sins.

Indulgences are lies, thundered the German monk. God’s forgiveness is a gift. It’s not for sale!

Fast-forward 500 years to today. How are Protestant churches reacting to this “anniversary” year? When my wife and I celebrate our anniversary annually—we’ve been married now for 16 wonderful years—we fondly remember our original vows and renew our commitment to each other. What is the Lutheran Church doing? Remembering its vows? Holding the torch ignited by its founder? Sadly, the opposite just occurred. Instead of exalting the banner of “truth above tradition” which Martin Luther upheld at the risk of his life, much of Lutheranism just recommitted itself to holding hands with Rome.

“Catholic and Lutheran Churches Pledge to Work for Shared Eucharist,” was the title of an October 31, 2016 article in the Catholic publication, Crux: Taking the Catholic Pulse. The feature picture shows Pope Francis hugging Martin Junge, General Secretary of the Lutheran World Federation, as they signed a joint statement pledging themselves “to remove the obstacles to full unity between their Churches.” Their meeting took place in Lund, Sweden, “to commemorate the 500th anniversary of the start of the Reformation.”

“Does the Reformation Still Matter?” was the title of an October 30, 2016 parallel piece written by religion editor Jacob Lupfer published by the Religion News Service. Making his case that Protestantism itself should be allowed to die a natural death, Mr. Lupfer quoted Southern Baptist Mega-Church pastor Rick Warren who stated that the word “Protestant” itself is “an old term. It’s like saying, ‘I’m a Pilgrim.’ No one calls themselves a Pilgrim or a Puritan anymore.”

In other words, R.I.P. Protestantism is deceased. Mr. Lupfer’s musings end with this reflection: “Five centuries is a long time…In another 500 years, Protestantism will have either gone back to Rome or splintered into a billion churches.”

Some comments are in order. First, based on prophetic signs we see around us (see Daniel 12:4; Luke 17:28-30; 21:25-28), the Lord Jesus Christ will surely return to earth long before “another 500 years” passes (see also 1 Thessalonians 5:1-3; 2 Peter 3:1-14). Next—and this is especially relevant in light of the growing political influence of Pope Francis and his earnest ecumenical activities—the basic issues that ignited the Protestant Reformation aren’t dead at all. They live, and remain today.

Essentially, in the 16th-century, the Protestant Reformation took its stand against the Roman Catholic Church over the authority of the Holy Bible verses man-made traditions—especially traditions that undermined the New Testament message of salvation by grace through faith in Jesus Christ alone, and over Church authority. The Protestant rallying cry became (using Latin words):

Yes, the Roman Catholic Church also taught (as it does today) the importance of faith, the value of Bible reading, and salvation through Christ and His grace; yet that small 4-letter Latin word “sola” (meaning “alone”) became the dividing line between reforming protestants and Catholicism.

In the 1500s, Protestants taught that a person can enter heaven by God’s grace alone, through faith alone, in Jesus Christ’s perfect merits alone, based on what is written in the Bible alone; whereas Rome added to the requirements of salvation numerous traditions, such as praying to Mary and dead saints, repeating the rosary, confessing sins to priests, performing works of penance, paying money to release one’s dead relatives from the flames of purgatory, and above all, belief in the supreme authority of the Pope as the successor of St. Peter and universal head of Christianity. Rome also added the notion that God’s forgiveness could be obtained by purchasing indulgences. “Yes, these traditions aren’t mentioned in the Bible specifically,” popes and priests admitted, “but they come from the Holy Spirit working through God’s Church.” “Sorry,” countered Protestants, “we don’t buy it. We’ll stick with Scripture, not misguided myths.” In the 1500s, these issues divided Christendom.

Significantly, as the struggle intensified, Luther eventually turned to the prophecies. By candlelight he read Paul’s solemn prediction of a “falling away” (apostasy) in Christian history (2 Thessalonians 2:3); of a “man of sin” to arise in its wake (verse 4), of a “beast” waging fierce “war with the saints” (Revelation 13:1,7), and of a mysterious Babylonian harlot (a false church) having illicit geo-political relationships with “the kings of the earth” (Revelation 17:1,5; 18:4). Little by little, God’s prophetic puzzle-pieces fit together. Horrified, Luther finally realized that he had discovered both Christ and antichrist. Compelled by the Spirit of God, Luther finally cast political correctness aside, went public, and declared, “We here are of the conviction that the papacy is the seat of the true and real Antichrist.”1

Disregarding the maxims and the spirit of the gospel, the papal church, arming herself with the power of the sword, vexed the church of God and wasted it for several centuries, a period most appropriately termed in history, the “dark ages.” The kings of the earth, gave their power to the “beast.”2

But haven’t times changed? you may be wondering. Indeed, they have. But essentially, Rome hasn’t. Notice carefully these 21st-century errors of Romanism:

Unwittingly, Protestants now seeking union with Rome are fulfilling God’s holy prophecy which states that in the closing moments of time, “All the world marveled and followed the beast” (Revelation 13:3). The Bible is still the Bible, the beast is still the beast, and eternal salvation from our sinful violations of God’s Ten Commandments comes only through simple faith in Jesus Christ alone (see 1 John 3:4; Acts 4:12). Prophecy also predicts that right before our Savior returns (Revelation 14:14-16), God Almighty will initiate His closing phase of the Protestant Reformation through the global proclamation of three angel’s messages recorded in Revelation 14:6-12. Pick up a Bible. Read Revelation 14:6-12 for yourself. God’s three angels are now announcing that the “hour of His judgment has come” (verse 7), urge the true worship of the Creator (verse 7), and warn about “the beast” (the Roman Church) who has even changed God’s original “seventh-day” Sabbath (Saturday) into Sunday (see Genesis 2:1-3; Daniel 7:25; Revelation 14:7,12; Exodus 20:8-11; Matthew 12:8; 28:1,2; John 14:15).

Above all, God’s end-time reformatory message urges belief in “the everlasting gospel” (verse 6) of Jesus Christ who loves everyone, and paid the full price for our sins (see John 3:16; 1 Corinthians 15:3,4).

What of the future?

A well-known writer has said:

God’s Word has given warning of the impending danger; let this be unheeded, and the Protestant world will learn what the purposes of Rome really are, only when it is too late to escape the snare. She is silently growing into power. Her doctrines are exerting their influence in legislative halls, in the churches, and in the hearts of men. She is piling up her lofty and massive structures, in the secret recesses of which her former persecutions will be repeated. Stealthily and unsuspectedly she is strengthening her forces to further her own ends when the time shall come for her to strike. All that she desires is vantage-ground, and this is already being given her. We shall soon see and shall feel what the purpose of the Roman element is. Whoever shall believe and obey the Word of God will thereby incur reproach and persecution.3

Make no mistake about it: The basic issues that divided Luther from Rome still exist today. According to prophecy, the Vatican is still the beast. We’ve come 500 years since Luther first protested in Wittenberg. Yes, times have changed, but the Bible hasn’t. Neither has Rome. God’s Reformation yet lives, and will continue to the close of time. “Whoever is on the Lord’s side—come to me!” urged Moses at the golden calf (see Exodus 32:26).

In an age of perilous ecumenical compromises, King Jesus Christ is asking the same question.

A Jewish Christian from Los Angeles, Pastor Steve Wohlberg is the Speaker/ Director of White Horse Media (Priest River, ID) and the host of Bible Talks with Steve Wohlberg. A prolific writer and much in-demand speaker, he is the author of over 40+ books and has conducted Bible prophecy seminars throughout North America and overseas. He has been featured on three History Channel documentaries (Nostradamus Effect: Secrets of the Seven Seals; Armageddon Battle Plan; Strange Rituals: Apocalypse) and has spoken by special invitation inside the Pentagon and U.S. Senate. He currently lives in Priest River, Idaho, with his wife Kristin and their two children, Seth Michael and Abigail Rose.
State of Georgia demands pastor turn over sermons Southern plagues: Drought, flood, fire and now killer storms

The Antichrist: Were the Protestant Reformers Correct?

Papal Rome against the Bible