Iran’s Lake Urmia turns blood red this week. In normal times, Lake Urmia in northwest Iran is aquamarine or greenish, as seen in this 2014 photo from the International Space Station: 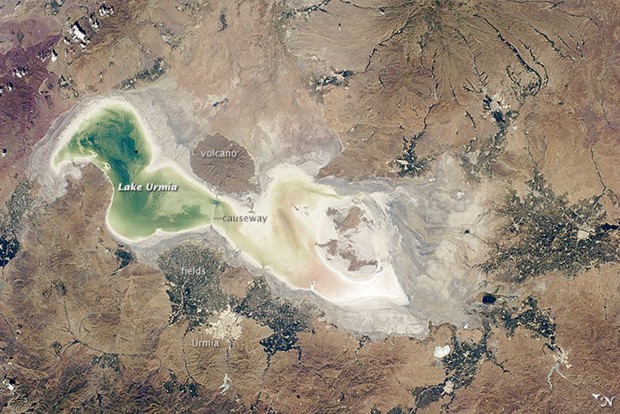 This week, however, it’s the distressing color of Kool-Aid tropical punch, a drastic change that leaps out in satellite imagery: 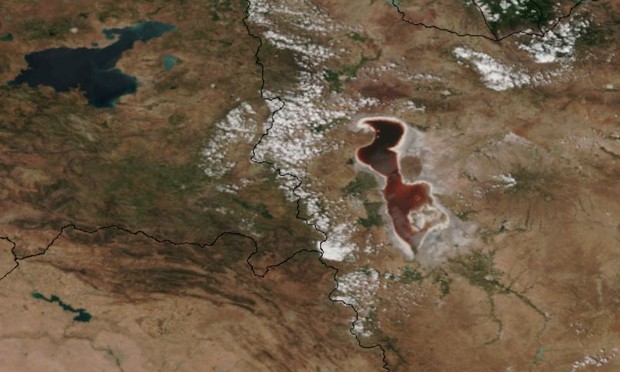 What the heck’s going on with Urmia, said to be the largest lake in the Middle East? (Due to recent shrinkage, some might dispute that honorific.) The answer lies on the microscopic level. The folks at NOAA’s Environmental Visualization Laboratory explain:

The lake, fed by roughly 60 rivers and streams—some permanent and some ephemeral—is filled with high levels of minerals and salts. Because the lake lacks an outflow, water can only leave by evaporation. The salts in the water do not evaporate, but accumulate as crusty, reflective mineral deposits on the lake shore. These can be seen from space as a white rim around the lake.

Traditionally blue or greenish in color, Lake Urmia’s red hue is attributed to a type of Halobacteriaceae, which are specialized bacteria that thrive in extremely salty conditions. Called halophiles (“salt-loving”), they produce pink-red pigments (bacterioruberins), and when found in abundance, the pigments from these bacteria can turn super-salty water pink or red. The presence of the red-pigmented halophiles, seen from space, marks an environment that has become extraordinarily saline.