With climate at ‘breaking point’, leaders urge breakthrough in Paris 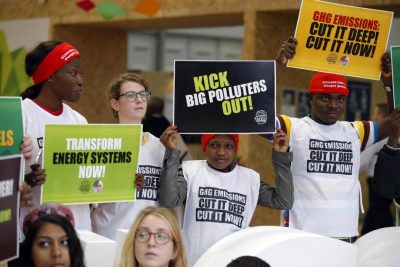 By Bruce Wallace and Alister Doyle

PARIS (Reuters) – World leaders launched an ambitious attempt on Monday to hold back rising temperatures, with the United States and China leading calls for the climate summit in Paris to mark a decisive turn in the fight against global warming.

In a series of opening addresses to the U.N. talks, heads of state and government exhorted each other to find common cause in two weeks of bargaining to steer the global economy away from its dependence on fossil fuels. French President Francois Hollande said the world was at a “breaking point”.

The leaders arrived in Paris with high expectations and armed with promises to act. After decades of struggling negotiations and the failure of a summit in Copenhagen six years ago, some form of agreement – likely to be the strongest global climate pact yet – appears all but assured by mid-December.

“What should give us hope that this is a turning point, that this is the moment we finally determined we would save our planet, is the fact that our nations share a sense of urgency about this challenge and a growing realization that it is within our power to do something about it,” said U.S. President Barack Obama, one of the first leaders to speak at the summit.

The leaders gathered in a vast conference center at Le Bourget airfield. In all, 195 countries are part of the unwieldy negotiating process, with a variety of leadership styles and ideologies that has made consensus elusive in the past.

Key issues, notably how to divide the global bill to pay for a shift to renewable energy, are still contentious.

El Niño strengthening, will be among biggest on record: WMO Mysterious California landslide: Public warned to stay away from warped road