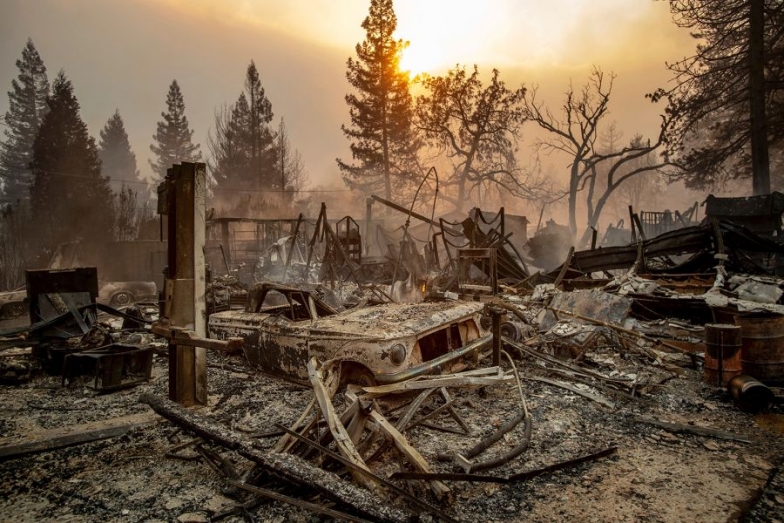 USATODAY: Raging wildfires across California have killed at least five people and driven 157,000 people from their homes, fire officials said Friday. Near Los Angeles, a large portion of the beachside town of Malibu was ordered evacuated as a wind-driven blaze jumped the U.S. 101 Freeway and raced toward the sea.

In Northern California’s Butte County, the sheriff’s office said investigators found five people dead in vehicles that were torched by the flames of a ferocious wildfire that roared through the town of Paradise. The victims were found in the same area of the devastated retirement community that also lost some 2,000 structures.

“A whole town was wiped out in 24 hours,” said Rocklin Police officer Jon Gee. “It’s crazy.”
Mark Ghilarducci, director of the California Governor’s Office of Emergency Services, said 157,000 people had been forced from their homes in three major fires in the Golden State, including the Camp Fire that destroyed Paradise.

The blaze, which erupted 80 miles north of Sacramento, quadrupled overnight to nearly 110 square miles, according to fire officials.

Maj. Gen. David Baldwin of the California National Guard said 100 military police were en route to Northern California to help evacuate people from the Paradise area. He said other military personnel were studying satellite imagery to assess the scope of the damage and map the fire.

Fire officials initially ordered the evacuation of all 13,000 residents of the community, which stretches 21 miles along the ocean, but later scaled it back to the western two-thirds of the city.

The Woolsey Fire had exploded to more than 5 square miles Friday morning and was continuing to grow.

Homeowners fleeing the wind-driven blaze around Malibu jammed roadways as the fire crept closer to the affluent, surfside community, which is home to numerous movie and TV stars. The celebrity site The Blast said homes belonging to Mel Gibson, Caitlyn Jenner, Lady Gaga, Courtenay Cox, Julia Roberts and Patrick Dempsey were located in the evacuation zone.

As cars snarled Pacific Coast Highway, some residents lined up five deep at a gas station for a last chance to get fuel. All were being directed south toward the safety of Santa Monica.

These fires sprang up very quickly and exploded into deadly infernos catching residents by complete surprise. Many fled on foot carrying their children and even their pets. Some were burned alive. Homes of the rich and poor alike were destroyed.

“The Lord God of Israel is to execute judgment upon the gods of this world as upon the gods of Egypt. With fire and flood, plagues and earthquakes, He will spoil the whole land. Then His redeemed people will exalt His name and make it glorious in the earth. Shall not those who are living in the last remnant of this earth’s history become intelligent in regard to God’s lessons?” Last Day Events, page 240.