It’s apocalyptic. The air around our house in North Idaho is thick with smoke. The moon looked orange from our window. My family has lived here for eight years and we have never seen smoke like this. This map shows current fires burning around us: 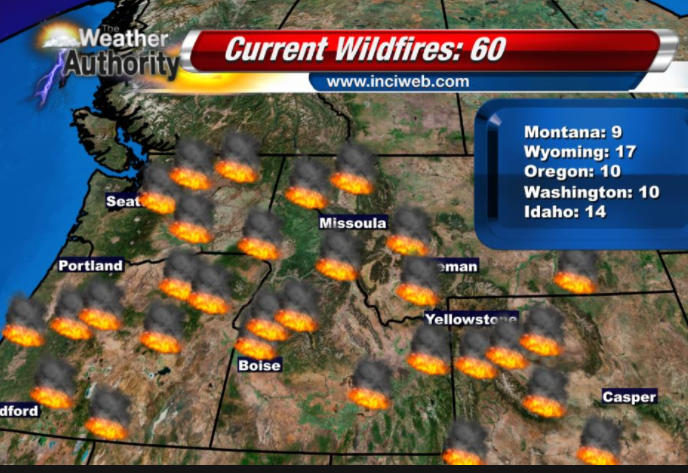 On the heels of Houston’s recent deluge with record rainfall from hurricane Harvey, at this moment, monster storm Irma — which could be “bigger than Andrew” — is closing in on Florida. Behind it, hurricane Jose is gaining speed.

What’s really going on? “It’s climate change from too much pollution,” affirm many scientists. Are they right? Many of those same scientists believe in evolution too. Yesterday I posted my take on my Facebook page, along with this quotation: “In quick succession the judgments of God will follow one another–fire and flood and earthquake, with war and bloodshed.” 9T, 97. So far, that post shows 35,800 “reaches,” and 517 “shares,” which shows me that people are not only listening, but also sharing this perspective through social media. So … just to clarify, yes, I do believe these terrible disasters aren’t rooted in man-made pollution and carbon emissions, but are rather “the judgments of God” falling upon our lost world to wake people up to future events, and to their need of a Savior, before it’s too late. I realize it’s not politically correct to publicly say this. But I believe its the truth. Here’s another quote:

In every age, God’s judgments have been visited upon the earth because men transgressed his law. What, then, have we to expect as we behold the wickedness which prevails at the present day? An ungrateful people, forgetful of God’s care, his long forbearance, and his unnumbered blessings, are showing contempt for his holy law. Many of the acknowledged leaders in the church and in the nation, break, and teach others to break that law, as sacred to God as his own throne and name. It is time for the Lord himself to assert his authority in the earth. And he is doing this, by fires, by floods, by tempests. He removes his protecting, providential care, and visits his judgments upon the children of men. Signs of the Times, December 15, 1881.

To further clarify, I don’t believe that every person who suffers in a disaster is guilty before God. No. Surely its not our place to make those kind of evaluations. In this sinful world, the innocent often suffer with the guilty. The verse that says, “For God so loved the world that He gave His only begotten Son” (John 3:16) always applies with peculiar force. God loves us all. He suffers with us. In every disaster, His merciful “hand is stretched out still” (Isa. 9:12,17) to save as many as possible.

As world conditions worsen, we at White Horse Media strongly believe that our end-time sharing resources will become increasingly valuable. They’re simple. They teach Bible truth. They’re easy to share. They lift up Jesus Christ as our Best Friend and Savior. Especially relevant now are: The Coming Judgments of God (pocketbook); our Making Sense of Natural Disasters (tract), and our There Shall Be Signs (4-color large tract).

As we approach October 2017, which also coincides with the October 31st 500th-year anniversary of the Protestant Reformation, we will also be making other key resources available such as The Antichrist Identified (pocketbook), Is God’s Church Built on Peter? (pocketbook), Two Beasts and the Devil’s Deadly Mark (4-color large tract), End-Time Delusions (large book), The Great Controversy (illustrated, hardcover), and Trick or Truth? (Halloween tract).

As signs thicken around us daily, we appreciate (as always) your prayers and financial support. Let’s also pray for those in the path of these deadly fires and storms.

May our merciful Jesus prepare us all for His soon return,

A Jewish Christian from Los Angeles, Pastor Steve Wohlberg is the Speaker/ Director of White Horse Media (Priest River, ID) and the host of His Voice Today radio and television broadcasts. A prolific writer and much in-demand speaker, he is the author of over 30 books and has conducted Bible prophecy seminars throughout North America and overseas. He has been featured on three History Channel documentaries (Nostradamus Effect: Secrets of the Seven Seals; Armageddon Battle Plan; Strange Rituals: Apocalypse) and has spoken by special invitation inside the Pentagon and U.S. Senate. He currently lives in Priest River, Idaho, with his wife Kristin and their two children, Seth Michael and Abigail Rose.
Harvey Hits Texas – Another Storm Cometh – Was Ellen White a True or False Prophet? Deadly Hurricane Irma devastates Caribbean islands, enormous catastrophe reported

New Video: Pray for the Holy Spirit. The Power of Digital Outreach.