“The Smoke of Her Burning” (Revelation 18:9): Lessons from the Notre Dame Fire.

There has been global buzz about the recent fire that so damaged the cathedral of Notre Dame and destroyed its roof and iconic spire. Support is being garnered from around the world, from both religious and government institutions—even from nations themselves who want to assist in rebuilding. 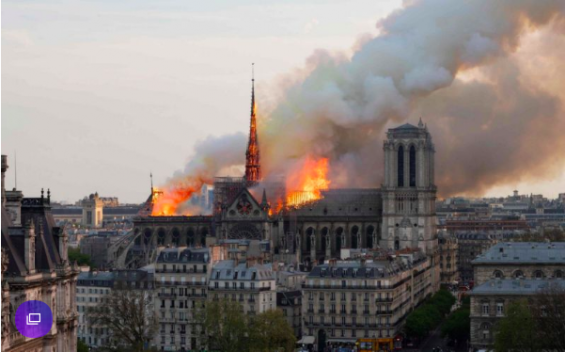 Notre Dame is a building of great historic significance, having been a monument in France for more than eight centuries. From the Reformation to the Revolution, from times of peace to those of the great world wars, Notre Dame is a bulwark of history.

It is also considered a great symbol for European Catholicism, especially in France. However, this history has some jagged points, that many are forgetting today and which prophecy says will be repeated in a last day scenario.

In the 16th century, Catholic France was jostled over the spread of the Protestant Reformation. The teachings of the reformers had inspired the most noble and upright in France to turn to Christ with deeper devotion as they realized that religious forms and ceremonies could not bring salvation. Instead, what everyone needed was faith in Jesus, followed by love and obedience.

The State Church of France was determined to rid the country of all “heretics” teaching such new light to the people. Many protestants (often called Huguenots in France) were tortured to death under the shadows of Notre Dame.

However, the most cruel and inhuman slaughter came through the counsel and planning of a Jesuit leader by the name of Francis Borgia. In history, it is known as the dreadful “St. Bartholomew’s Day Massacre.” The date: August 24 and 25, 1572.

That night, a signal was given by the ringing of the church bells in the Saint-Germain-l’Auxerrois quarter of Paris, near Notre Dame. At the tolling of the bells, French Catholic soldiers along with clergy and local citizen death squads began systematically murdering France’s protestant population.

History records that men, women and children were dragged from their homes and murdered that fearful night. Blood ran down the streets like water as so many were mercilessly slain, fulfilling the prophecies of Daniel 7:21 and Revelation 17:6. Some estimate the total number of protestants in France killed numbered one hundred thousand.

The Book of Revelation speaks of a “woman” who is “drunk with the blood of the saints.” In chapter 17, this “woman” is called a “harlot.” A woman in Scripture represents a church, and in this chapter, she is represented as having an illicit relationship with the kings (nations) of earth (see vs. 2). She is also called “Babylon” (see vs. 5) because the doctrines she teaches are a mixture of religious/pagan confusion.

When we look at history, we ask, what Church has been so noted as persecuting and murdering conscientious Christians? What church is most known for illicit relationships with Nations and Kings? And what church incorporates a mixture of beliefs with pagan origin into her worship?

There is only one: The Roman Catholic Church.

Yet, God does not allow the fact that He still has faithful followers in a false system to keep His retributive justice from dealing with that same false system.

In Chapter 18 of Revelation, this same false system (Babylon) finds God’s judgments rendered against her at the end of time. We read:

For her sins have reached unto heaven,
and God hath remembered her iniquities.
Revelation 18:5

Revelation 18:8: “Therefore shall her plagues come in one day, death, and mourning, and famine; and she shall be utterly burned with fire: for strong is the Lord God who judgeth her.”

The day comes when God’s judgments falls upon the apostate systems of worship. These judgments are termed plagues and well as “fire.” Notice what else prophecy predicts,

And the kings of the earth, who have committed
fornication and lived deliciously with her, shall bewail her,
and lament for her, when they shall see the smoke of her burning,
Standing afar off for the fear of her torment, saying,
Alas, alas, that great city Babylon, that mighty city!
for in one hour is thy judgment come.
Revelation 18:9,10

The kings and nations see God’s judgments of fire upon this false system and they lament such judgments as they bewail her and watch her burning.

I was moved to hear of crowds in France watching the burning of Notre Dame and weeping at the sight; and couldn’t help reflecting upon the similarity to these texts, for Notre Dame is recognized as the symbol of Europe’s Catholic history—history drenched in the blood of innocents. 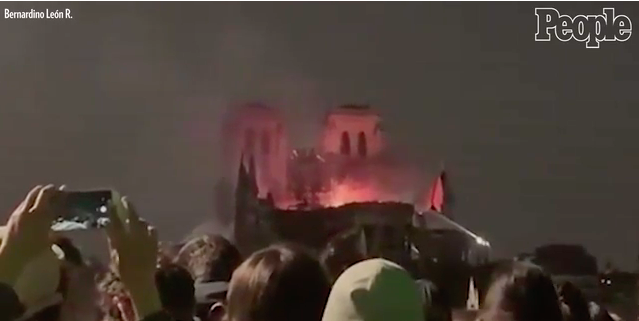 What can we learn from the fire of Notre Dame?

1) The great monuments of man are transitory and will not last.
2) The history of the monument is not as always as nostalgic as we might like to think.
3) That judgments from God Himself will one day fall upon all false systems of worship that turn people away from a personal and saving relationship with Jesus Christ to a system or works and rituals that can never save but only bring confusion and despair to people.

For more information about Antichrist, the Reformation, and the book of Revelation’s prophecies about the coming destruction of Babylon, we recommend White Horse Media’s most popular book, End Time Delusions.

May God prepare us for the soon return of Jesus Christ,

A Jewish Christian from Los Angeles, Pastor Steve Wohlberg is the Speaker/ Director of White Horse Media (Priest River, ID) and the host of His Voice Today radio and television broadcasts. A prolific writer and much in-demand speaker, he is the author of over 30 books and has conducted Bible prophecy seminars throughout North America and overseas. He has been featured on three History Channel documentaries (Nostradamus Effect: Secrets of the Seven Seals; Armageddon Battle Plan; Strange Rituals: Apocalypse) and has spoken by special invitation inside the Pentagon and U.S. Senate. He currently lives in Priest River, Idaho, with his wife Kristin and their two children, Seth Michael and Abigail Rose.
WHM eBook, God’s Remnant Church Divided (Temporarily), Now in Print White Horse Media Sale: All DVDs ONLY $2 Each!