From August 27 through September 9, 2019, White Horse Media speakers and associate speakers held six simultaneous evangelistic meetings (sites pictured below) for ten consecutive nights on the small island of Talikud in the Philippines. Talikud Island is roughly 2.5 x 5 miles with an estimated population of about 9,000. 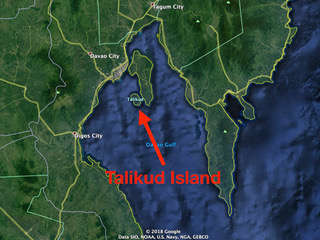 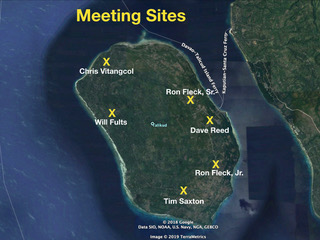 For many years Talikud has been the home of different religious groups, including Catholics and Muslims, but there was no official Adventist presence there until these meetings. The speakers (from left to right) were: Will Fults, Dave Reed, Ron Fleck, Sr., Ron Fleck, Jr., Christopher Vitangcol, and Tim Saxton (single picture below).

For months prior to the meetings, Bible workers gave health talks throughout the island and developed friendships. When the “Revelation of Hope” Bible prophecy meetings began hundreds of islanders attended, including many children. Night by night, those who were hungry for God’s Word continued attending, in spite of fierce nightly thunder storms and power outages. In answer to many earnest prayers from His people, God graciously kept each meeting site going to successful conclusions.

At the end of the meetings, 173 were baptized in the ocean, including two protestant pastors, a witch (now a former witch), and one man with a tracheostomy (he breathes from his throat) whose baptism was quite a challenge (pictured last), but a success!

Churches will soon be built on the island to house these new believers in Jesus Christ. God is so good! Follow-up work is still needed on Talikud so that more people can be reached with the good news of Jesus and His end-time message (see Revelation 14:6-14).

White Horse Media is a faith ministry made up of many families trusting Jesus. We appreciate so much your prayers and financial support.

A Jewish Christian from Los Angeles, Pastor Steve Wohlberg is the Speaker/ Director of White Horse Media (Priest River, ID) and the host of His Voice Today radio and television broadcasts. A prolific writer and much in-demand speaker, he is the author of over 30 books and has conducted Bible prophecy seminars throughout North America and overseas. He has been featured on three History Channel documentaries (Nostradamus Effect: Secrets of the Seven Seals; Armageddon Battle Plan; Strange Rituals: Apocalypse) and has spoken by special invitation inside the Pentagon and U.S. Senate. He currently lives in Priest River, Idaho, with his wife Kristin and their two children, Seth Michael and Abigail Rose.
Record-breaking Hail in Colorado Timely Halloween Resources for Sharing / Papal Global Pact

WATCH NOW My Personal Testimony: “From Hollywood to Heaven”