In case you haven’t heard, the upcoming meeting between Pope Francis and world leaders scheduled for May 14, 2020 has been postponed and rescheduled for October 11-18. The new tentative date for signing the pact is October 15. 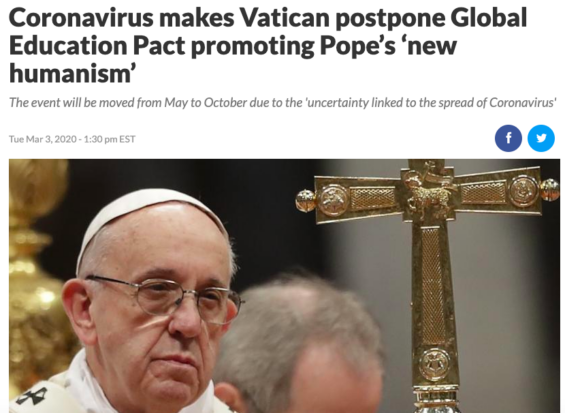 Bible-believing Christians were alerted in 2019 when the Global Pact event was first announced. The significance of world leaders converging on Rome to sign a joint agreement with the Pope has awakened many of us to a further fulfillment of Bible prophecy.

As White Horse Media has explained in many articles, seminars, radio and TV programs, the symbol of the sea beast of Revelation 13:1-10 which achieves global recognition (vs. 7), and who the entire world eventually “wonders” at (vs. 3), unquestionably represents (as Protestant taught for nearly 400 years) the Roman Catholic Church system centered in the authority of the Pope.

Beyond this, as we’ve also explained many times, Rome’s “mark” (according to Catholic Records) of authority is its shocking claim to have changed the true biblical seventh-day Sabbath (see Exodus 20:8-11) from Saturday to Sunday, without any Scriptural support (see our newest booklet, The Truth about the Sabbath).

Not surprisingly, Pope Francis, in his 2015 encyclical, Laudato Si, encourages a worldwide return to Sunday observance as part of his solution to the global climate crisis.

Unveiling the future, the book of Revelation predicts that as the world follows the Papacy and receives its “mark” (when legislated globally), false religious worship will be mandated (even in the United States), creating a global division between those who follow the Bible first and foremost, and those who cling to the traditions of men. In Mathew 15:9, Jesus Christ plainly warns us to place the commandments of God above human traditions.

To obey the words of Jesus, we must not compromise.

In related news, Pope Francis also recently announced a global campaign, called “Laudato Si Week,” this coming May, in commemoration of the 5th anniversary of his encyclical. Most likely, this new campaign will again highlight the pope’s desire that everyone everywhere honor Sunday.

In these days of crisis, confusion, deception, and rapid prophetic fulfillment, White Horse Media wants to encourage those who believe in God’s holy three angels’ messages found in Revelation 14:6-12 to share these solidly biblical truths like the leaves of autumn:

Our new pocketbook:
Climate Change: Is it the End of the World?

Our new booklet:
The Truth about the Sabbath

We live in frightening, yet exciting times. Please pray for us at White Horse Media that God will continue to help us to boldly proclaim His end-time messages. We need His protection, too. Surely Jesus is coming soon. It won’t be long until we see our loving Savior face to face. May God help us all to respond to His infinite love demonstrated on Calvary, to repent of our sins, and to be ready “to stand before the Son of Man” (Luke 21:36).

A Jewish Christian from Los Angeles, Pastor Steve Wohlberg is the Speaker/ Director of White Horse Media (Priest River, ID) and the host of His Voice Today radio and television broadcasts. A prolific writer and much in-demand speaker, he is the author of over 30 books and has conducted Bible prophecy seminars throughout North America and overseas. He has been featured on three History Channel documentaries (Nostradamus Effect: Secrets of the Seven Seals; Armageddon Battle Plan; Strange Rituals: Apocalypse) and has spoken by special invitation inside the Pentagon and U.S. Senate. He currently lives in Priest River, Idaho, with his wife Kristin and their two children, Seth Michael and Abigail Rose.
(WATCH NOW) WHM Program on Coronavirus Coronavirus Crisis Escalates. New WHM Program Slated for Thursday, March 12

WATCH NOW Coronavirus And The End Times with Steve & Tim