Believe it or not, the root of the idea that Pope Francis is “His Holiness” is the Roman Catholic teaching that Jesus Christ made His disciple Peter the “head” and “rock” of His Church, and that this authority has been transferred exclusively from Peter to Roman Popes, all the way down to Pope Francis. Is this claim valid? If it is, then when the Pope speaks, we should listen carefully. If it isn’t, then the entire structure of Roman Catholicism is built on a fraudulent claim. White Horse Media’s newest pocketbook, Is God’s Church Built on Peter? carefully and frankly examines this red hot issue from the Holy Bible, including some history too. The pocketbook ARRIVED TODAY at our office and and looks like this: 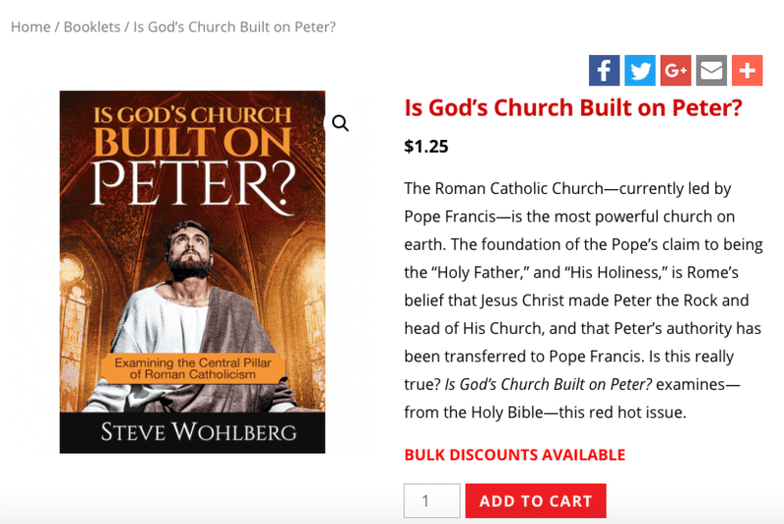 Shortly after Melania Trump met Pope Francis, The Washington Post revealed that the first lady has decided to go public that she is Catholic too. Think about it. The man who holds the most powerful office on planet earth (President Trump) called Pope Francis “His Holiness,” his wife is also Catholic, and there are over 1.2 billion Catholics in the world. The Roman Church is building authority on all sides for earth’s closing events in fulfillment of Revelation 13:3,7,8. Now is a perfect time to widely share Is God’s Church Built on Peter? with open-minded searchers for Bible truth.

This book is a sharing, missionary book. Believe me, if you have Catholic friends you are considering giving it too, they shouldn’t be offended by the language in the book. It’s simple, compelling, and again, kindly written. Some reviewers who have already read the manuscript have said:

>I just read Steve’s new book, and have one word to describe it—MARVELOUS. This will be a wonderful sharing tool to give to Catholics, as Steve has very simply and eloquently unveiled the counterfeit belief of papal progression. In fact, the argument in favor of Christ being the Rock upon which the church is built is clearly and definitely presented from Scripture. I can’t imagine how an intellectually-honest person could argue otherwise after reading this. –Shelley Quinn, author, 3ABN host

>Thank you so much for the opportunity to review this booklet. My opinion is that it is accurate, concise and very well written. I really love how you lift up Christ to His rightful position all through the book! Sadly many Catholics today are looking to the pope for their salvation. His claims/words are truly ‘pompous’! I will be praying for the souls that will read this book and make the decision to come out of her before it is too late. May God continue to bless and protect you, your family and your ministry! Your fellow traveler on the narrow road. —Deborah Vinke

>Pastor Steve it was a privilege to preview your manuscript “Is God’s Church Built on Peter?” This book will really be a help to former Catholics trying to work for their beloved families that are still in the Catholic Church. There are many millions of sincere people in the Catholic community. I will definitely order some of these books. We are praying for you, your family and ministry. And special prayers that God will give you wisdom to finish this book in a timely manner. —Yours in Christ, Rocco A. Maccarone

Bulk prices are here. As my practice has been, for those who are considering a bulk purchase of pocketbooks, we have created this private link just for you so that you may now preview the entire booklet (it’s short) for the next two weeks (then the link will be removed). Thus you will know what’s in the book before you buy. We also hope that some will sponsor the mailing of this small pocketbook to their entire zip code. If you are interested in doing this, contact White Horse Media.

Millions of godly Catholics need to be reached with Bible truth. We hope and pray that Jesus Christ Himself will work mightily through Is God’s Church Built on Peter? to reach their hearts.

One more thing: Why not consider adding to your order White Horse Media’s 45-minute sharing DVD, Earth’s Final Crisis, which exposes end-time spiritualism, the role of the papacy in earth’s final events, the truth about the mark of the beast, and the Good News of the love, forgiveness, and righteousness of Jesus Christ. Bulk prices are here.

Lifting up our Savior,

A Jewish Christian from Los Angeles, Pastor Steve Wohlberg is the Speaker/ Director of White Horse Media (Priest River, ID) and the host of His Voice Today radio and television broadcasts. A prolific writer and much in-demand speaker, he is the author of over 30 books and has conducted Bible prophecy seminars throughout North America and overseas. He has been featured on three History Channel documentaries (Nostradamus Effect: Secrets of the Seven Seals; Armageddon Battle Plan; Strange Rituals: Apocalypse) and has spoken by special invitation inside the Pentagon and U.S. Senate. He currently lives in Priest River, Idaho, with his wife Kristin and their two children, Seth Michael and Abigail Rose.
White Horse Media in India, Netherlands, London Melania Trump: A Practicing Roman Catholic?