It’s official: This is the biggest El Niño on record, and a killer La Niña is coming

On Wednesday morning, NOAA released its data for the Pacific Ocean temperatures for the week of November 9. We hit a record — the current El Niño is the strongest in recorded history.

Before 2015, the largest recorded weekly reading of El Niño occurred during the week of November 26 in 1997. We passed that milestone last week. In 1997, the El Niño index set a record of 2.8:

As of last week the Pacific Ocean in region 3.4 (where El Niño is measured) hit a record of 3.0: 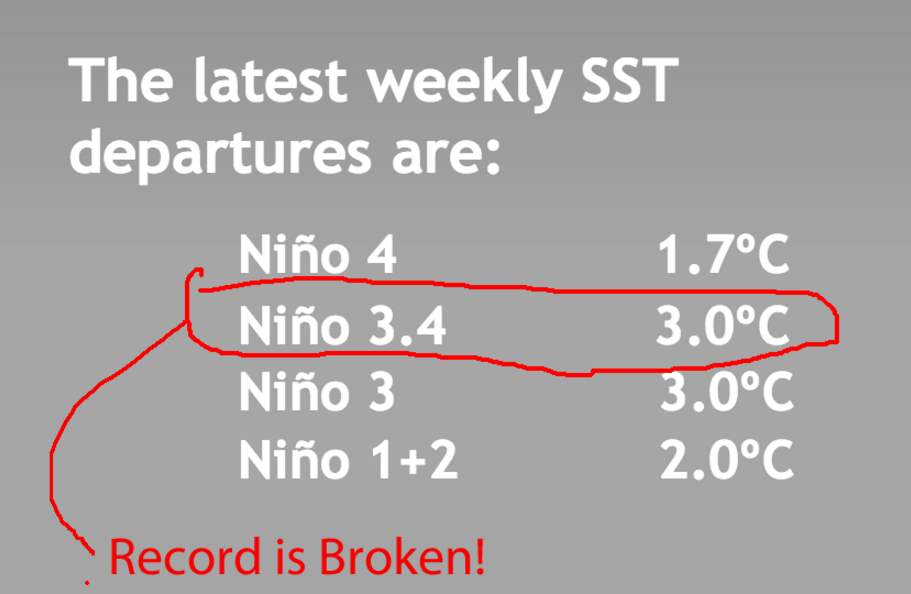 So another weather record has been set. What does it mean? In the very short term it means that there will be some hellacious weather in the US Pacific West/Texas in the next 90 days. It also means there will be a drought in Australia and Indonesia. Other parts of the globe will feel the consequences of the mega Niño.

Another consequence of this year’s El Niño, however, is virtually a sure thing to happen within the next half year. A very rapid change in El Niño water temperatures will follow — in nine months we will have gone 180 degrees in the opposite direction and we will be dealing with a very strong La Niña.