Is the Climate Change Movement a Trojan Horse?

Did you see this headline? 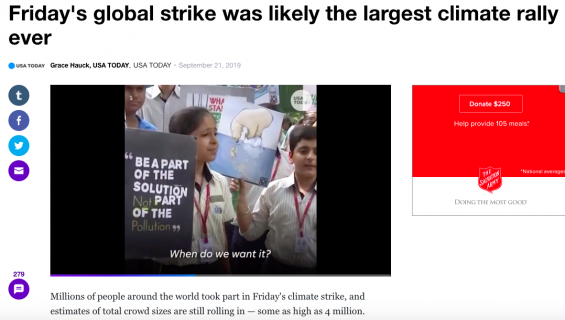 On Friday, September 20, millions of stop-climate-change-now activists rallied in cities across the globe demanding that rulers and lawmakers immediately pass legislation curbing the use of fossil fuels which (according to the theory) spew too much carbon dioxide into the atmosphere which (again, according to the theory) is leading to weather-related catastrophic consequences. “Time is running out!” is their message. “Leaders must pass laws now!” Personally, I’m all for cleaning up our environment and taking care of Planet Earth. But I’m concerned about where this current climate change movement might end up in the light of Bible prophecy.

Consider this. Perhaps the biggest influence behind much of the climate change movement is Pope Francis and his encyclical, Laudato Si, which is all about taking care of our environment. Within the Pope’s encyclical is also his strong recommendation that keeping Sunday as a day of rest and not working on that day would help heal our planet, presumably because less work means less burning of fossil fuels and thus less pollution and less damaging climate change. The book, The Great Controversy, written over a hundred years ago, makes this startling prediction about a grass roots movement ultimately seeking Sunday laws:

Political corruption is destroying love of justice and regard for truth; and even in free America, rulers and legislators, in order to secure public favor, will yield to the popular demand for a law enforcing Sunday observance. Liberty of conscience, which has cost so great a sacrifice, will no longer be respected. In the soon-coming conflict we shall see exemplified the prophet’s words: “The dragon was wroth with the woman, and went to make war with the remnant of her seed, which keep the commandments of God, and have the testimony of Jesus Christ.” Revelation 12:17. The Great Controversy, p. 592

This prediction says that “rulers and legislators” will eventually yield to “the popular demand” for a “law enforcing Sunday observance.” At this moment, the “popular” climate change movement is making its “demand” that “rulers and legislators” pass environmental laws. At the same time, beneath this same movement is the Pope’s encyclical which also promotes Sunday observance.

Could the climate change movement be a preliminary trojan horse hiding Sunday laws?

At White Horse Media, we are watching these things very closely.

To learn more about what Bible prophecy predicts about the papal power, its attempted change of the Sabbath into Sunday (see Daniel 7:25), the final enforcement of Sunday and the mark of the beast (see Revelation 13:16,17; 14:9-12), and how Jesus Christ our Creator (see John 1:1-3, 10) who made the Sabbath (see Matthew 12:8; Mark 2:27,28) unselfishly died on a cruel cross to pay the price for our sins of breaking His Law (see 1 John 3:4; 1 Corinthians 15:3), watch our “Startling Prophecies for America” series now viewable for FREE on our YouTube channel or available on DVD.

Satan is sneaky. Rest assured that he does have trojan horses.

God’s truth is in the open. Just read the Ten Commandments in Exodus 20:1-17. The 4th commandment says plainly that “the seventh day is the Sabbath of the Lord.” Exodus 20:10. The cross of Jesus Christ is also in the open. Outside Jerusalem, on a visible hill for the world to see, Jesus paid the price. He loves us. He is committed to us. He wants us to be with Him forever.

If you haven’t done so already, give your heart to Jesus today!

A Jewish Christian from Los Angeles, Pastor Steve Wohlberg is the Speaker/ Director of White Horse Media (Priest River, ID) and the host of His Voice Today radio and television broadcasts. A prolific writer and much in-demand speaker, he is the author of over 30 books and has conducted Bible prophecy seminars throughout North America and overseas. He has been featured on three History Channel documentaries (Nostradamus Effect: Secrets of the Seven Seals; Armageddon Battle Plan; Strange Rituals: Apocalypse) and has spoken by special invitation inside the Pentagon and U.S. Senate. He currently lives in Priest River, Idaho, with his wife Kristin and their two children, Seth Michael and Abigail Rose.
Timely Halloween Resources for Sharing / Papal Global Pact Dr. Ronald Robin Bible Prophecy Seminar in Australia – Oct. 25 through Nov. 9