Last week, while I was walking through the Chicago O’Hare airport, I saw a man sitting gloomily at a shoe shine stand, waiting for customers. On an impulse, I decided to give him one of our “Trick or Truth” Halloween tracts. A little while later I walked by again and saw that tract sitting on the ground near his feet. He probably won’t read it, I thought to myself, but at least I tried. About a half hour later (after I had a bite to eat), I took an escalator down to another level as I journeyed to my gate. Looking to my right, I was shocked to see that same shoe shine man earnestly reading my tract to another shoe shine man! “Smile, while I take your picture!” I said. 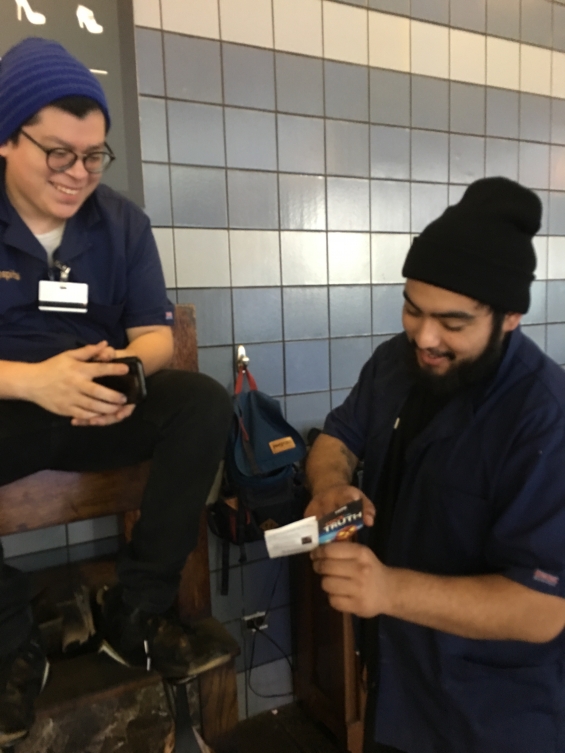 Truly, we have no idea what the Holy Spirit will do with one, single, solitary, seemingly insignificant tract! Years ago, a friend of mine was in a public library. At the time, he wasn’t a Christian. Finding a book he was looking for, he opened it, and lo, nestled within its pages was a Bible tract. To make a long story short, my friend read that tract, became a Christian, and later made a living selling books about Jesus door-to-door. Again, behold the impact of one, single, solitary, seemingly insignificant tract!

Who knows? In Heaven you might meet someone whom God saved through one, single, solitary, seemingly insignificant tract.

A Jewish Christian from Los Angeles, Pastor Steve Wohlberg is the Speaker/ Director of White Horse Media (Priest River, ID) and the host of His Voice Today radio and television broadcasts. A prolific writer and much in-demand speaker, he is the author of over 30 books and has conducted Bible prophecy seminars throughout North America and overseas. He has been featured on three History Channel documentaries (Nostradamus Effect: Secrets of the Seven Seals; Armageddon Battle Plan; Strange Rituals: Apocalypse) and has spoken by special invitation inside the Pentagon and U.S. Senate. He currently lives in Priest River, Idaho, with his wife Kristin and their two children, Seth Michael and Abigail Rose.
Upcoming Midterm Elections: Midterm vs. Eternal Election Day SPECIAL OFFER. Lincoln Nebraska Revival Nov. 10