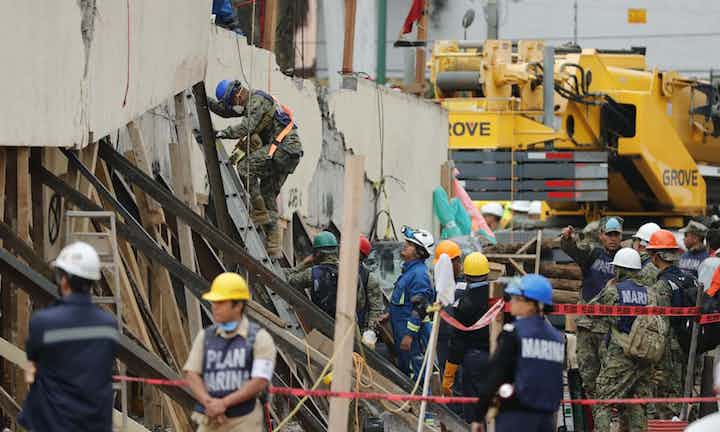 Hopes that rescuers will find more survivors trapped beneath collapsed buildings in central Mexico faded as the scale of the devastation wreaked by the country’s deadliest earthquake for a generation started to become clear.

The death toll from the 7.1 magnitude quake rose to 282, including at least 137 in the capital, and is almost certainly set to rise as rescue workers continue to search the precarious ruins amid the threat of aftershocks, collapsing rubble and gas leaks.

But details of the destruction outside the capital are only now starting to emerge, with reports of entire towns flattened and thousands of people left homeless. The damage was especially acute in the municipality of Jojutla, where houses were reduced to rubble.

In Puebla state, authorities have declared a state of “extraordinary emergency” in 112 municipalities – equivalent to 51% of the region.
At least 1,700 homes have been declared uninhabitable and should be demolished over coming months, according to the state governor. The number could well rise after experts finish more exhaustive inspections. In Metepec, a quaint colonial town, almost every house and business has suffered structural damage, raising fears among residents that the rebuild could take years.

Reports of clashes between volunteer rescue workers and the armed forces are also surfacing across the capital. “The army has a history of imposing brutal triage rules for natural disasters which dates back to the 1985 earthquake,” said public policy analyst Rodolfo Soriano Nuñez. They might get away with this arrogant approach in Oaxaca or Chiapas, but not in Mexico City.”

“The time is at hand when there will be sorrow in the world that no human balm can heal. The Spirit of God is being withdrawn. Disasters by sea and by land follow one another in quick succession. How frequently we hear of earthquakes and tornadoes, of destruction by fire and flood, with great loss of life and property! Apparently these calamities are capricious outbreaks of disorganized, unregulated forces of nature, wholly beyond the control of man; but in them all, God’s purpose may be read. They are among the agencies by which He seeks to arouse men and women to a sense of their danger.” Prophets and Kings, page 277.

‘Society is changing’: A record 5.6% of U.S. adults identify as LGBTQ, poll shows. And young people are driving the numbers.